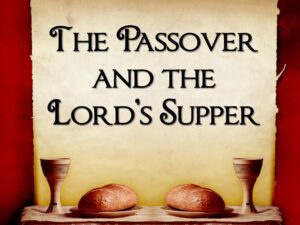 The Passover Feast, also known as Festival of Unleavened Bread, is a commemoration of the deliverance of God’s people,  Israel, from the slavery of Egypt.

Before making their exodus from Egypt, God would strike Egypt with one final blow, killing every first born of every family; Therefore Israel was instructed to take the blood of the sacrificial lamb and wipe it on the door frame and post of each house, so the Angel of Death would pass-over them. – Exodus 11-13

Many generations later, God’s Messiah would come as the ultimate fulfillment of the Sacrificial Passover Lamb. The night before Messiah would be sacrificed, the disciples of Jesus partook in the Passover Feast as Jesus instructed them to commemorate this event with the breaking of bread – symbolizing His body, broken for us;  and the wine – symbolizing His blood – poured out for the forgiveness of sins – to confirm the new covenant.

Every detail of the Passover Feast was a reference to the atoning sacrifice of Jesus Christ. Furthermore, the LORD declared the Passover Feast to be a sign, like a mark branded on their hand and forehead, to remind them of God’s deliverance (Exodus 13:9, 16).

Thus we may regard the Lord’s Supper as not only the ultimate fulfillment of Passover, but also a way of identifying those whom are His. The commemoration of the Lord’s Supper is like a mark on the hand and forehead of His people who give their allegiance to the LORD Yahweh. Therefore, this may also serve to indicate what is meant by Satan’s pseudo-messiah-antichrist – who institutes a false sacrificial meal, which may very well be that ‘mark of the beast’ spoken of in Revelation 13:16.   See- The Eucharist Strikes the Gospel

John the Baptist pointed to Jesus saying, “Look, the Lamb of God who takes away the sins of the world!” (John 1:29).

The true Passover Lamb was to be God’s Messiah – who alone was qualified without spot or defect (sin) – to be the ultimate sacrifice for sin – once and for all (Hebrews 10:10-18).

“It is finished”  – Jesus said on the cross.  Tetelestai – paid in full, complete.

The finished work of Christ’s atoning sacrifice is the confirmation of the New Covenant and the very heart of the Gospel. This is the good news of Jesus Christ to be proclaimed throughout all the world. But let us not overlook the exceedingly blasphemous nature of the Eucharists which  means to perpetually  sacrifice the body and blood of Christ each and every mass. Most do not know the true meaning of the Eucharists and how diametrically opposed it is to the finished work of Christ, so again refer to The Eucharist Strikes the Gospel for  clear definition.

The Word of God is a light which shines on the darkness of an evil world, exposing even the most highly esteemed principles and principalities of the age. Let us celebrate in the Lord’s Supper as often as we will, that it would remind us of God’s deliverance while identifying us as His, and reassurance of the consummation of God’s Kingdom when He drinks with His betrothed Church on that glorious day!

Simon Magus and the Origins of the Catholic Church 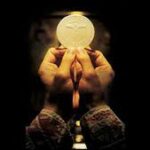