“Then I wished to know the truth about the fourth beast… and the ten horns that were on its head, and the other horn which rose up, before which three fell, namely, that horn which had eyes and a mouth which spoke pompous words, who appeared greater than the others.”   Daniel 7:19-20

Special focus is given to the ‘Little Horn’ of Daniel’s visions, which is no trivial matter, seen as how ‘the same horn was making war against the saints and prevailing against them until the Ancient of Days came.’   Daniel 7:21

When analyzing the prophetic visions of Daniel, it becomes clear that God intends for His people to know the meaning of these, and understand this antichrist element that dominates the age we live in, which persecutes the saints- until the return of Christ.

It’s clear God wants His people to understand because, on several occasions, God imparts, not only the prophesies, but the interpretations thereof, to make known the meaning. The same vision is gone over three times in chapter 7. Furthermore, Jesus refers to the visions of Daniel and says, “whoever reads, let him understand”  –Matthew 24:15

Yet few actually understand these pertinent truths which have direct impact upon the times we live in.  Lets see why that is…

One of the biggest errors in postmodern Christian thinking and teaching of Eschatology (study of the final outcome of redemptive history), is the idea that the Antichrist is a ‘single person’ who rises up only at the very end of the age. This is a quite new idea which has gone mainstream, an error caused by the barrage of mass spiritual deception as well as biblical illiteracy and failure to understand ‘prophesy language’. So before we correct the error of thinking relating to the antichrist, we must first be grounded with the biblical definitions of ‘key words’ used in prophesy language:

Referring to the biblical definitions of these key words enables a correct interpretation of  prophetic language for proper understanding. So let us consider the main elements of Daniel’s vision in chapter 7– as this vision provides a template for John’s vision of The Revelation of Jesus Christ:

(It’s important to note that the elements of this vision have not been left to our own interpretation, but has been interpreted by the angel of God, as recorded in verses 23-27 of Daniel chapter 7, which is corroborated by history. So there is little room for conjecture or diverse ideas if kept within scriptural parameters. The following is just an analysis and biblical interpretation of the revelation with historical confirmation)

~ So here are the basic elements of Daniel’s vision:

(History, archeology and other visions of Daniel shed light on the identity of these kingdoms) 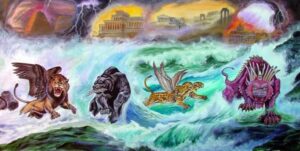 (there are minor variations of the exact kingdoms among scholars, but the general consensus views the ’10 horns’ as the major European nations of the  Roman Empire at the time when the power of the little horn rose to a dominant status.)

Also, we need to understand  the prophetic use of the word ‘king’ is not limited to a single monarch, but usually refers to a broader meaning of the word ‘king’- to denote  a kingdom, or supreme form of government, dynasty or mode of administration governing the kingdom. Note how the angel of God interchanges between ‘king’ and ‘kingdoms’ when describing the four beasts- –first– as four kings (malchin) in Daniel 7:17, –then– as kingdom (malchu) in 7:23.

The four beasts obviously do not represent single monarchs, but entire kingdoms; Likewise, the word ‘horn’ does not necessarily denote a single king, but a succession of kings, or supreme form of government, dynasty, or mode of administration governing the kingdom.  The symbolic words ‘beast’ and ‘horn’ serve to differentiate between the ‘kingdom’ and the ‘supreme ruling power’ governing the kingdom.

Now remember the ‘Little Horn’ is still of the Fourth Beast (Fourth Kingdom- Rome) and this particular ‘Little Horn’ rises up to make war against the saints, and prevails against them until the Ancient of Days came (until the return of Christ) -verses 21-22

~ So some of the things revealed in Daniel’s vision are:

~ What dynasty succeeded the throne of Caesar?

~ What other figure is called the “Papal Caesar” ?

~ Is this a single person or an era of a certain ruling power?

~ And is it only a political power, or is it also a religious power?

The next detail the angel speaks of in regards to the kingdom of this antichrist power is the time duration of this rule:

“Time, times and half a time”

(The exact duration of this time-frame, as listed above, can be certain when kept within scriptural parameters;  however its exact placement in history is more difficult, so there has not been exact consensus regarding the placement of this time frame, but some propositions are given as well as a more detailed expository of this duration of time in this link).

The ‘Little Horn’ of Daniel, being that supreme ruling power which continues the Roman Kingdom, is the most fundamental qualification for the antichrist; It reveals a truth that mainline Christianity of today does not dare teach. When realizing what the ‘Little Horn’ actually is and the magnitude of power it wields, it is understandable why so many have either shrinked back from calling a spade a spade, or are just overtaken by the onslaught of its mass deception.

Related Articles
Daniel’s Dream ~ What Does it Mean?
Discerning The Threads of Eschatology
The Abomination of Desolation – Standing in the Holy Place
Time, Times and Half a Time | Time of the Antichrist
The Eucharist Strikes the Gospel
Order Out of Chaos
The Rapture 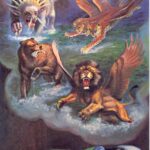 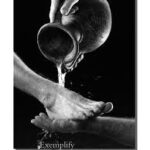