The essential meaning of the term ‘Protestant’, comes from those who ‘protested’  the abused authority of the the Roman Pontiff.  But the Protestant Reformation only reformed so far; A fundamental element such as ‘Church Hierarchy’ was only watered down to a more subtle form of  hierarchy.

Even those key elements which actually were reformed came to be reversed or weakened by the Jesuit Counter Reformation and recovery of Papal temporal power.

Hence, here are 21 ways which Protestants obey the Pope:

3. The clergy employs a subtle form of  ‘intermediary practice’ and domination while the “laity” fails to fully step into their call to ministry.  –1 Timothy 2:5,  Ephesians 4:11-13

6. Moving away from the objective truth of God’s Word and into subjective experiential mysticism.

9. Attend and/or send kids to schools and seminaries controlled by Jesuits.    -see sources

10. Firmly embraces Jesuit doctrines such as ‘Preterism‘ and ‘Futurism‘.   -see Discerning the Threads of Eschatology

13. Submits to centralized authority of  ‘National and World Council of Churches’ controlled by the Vatican.   -see sources

16. Maintains the principle of the ‘union of Church & State’.   -see sources

19. Scripturally & historically illiterate and undiscerning so to not recognize the above conditions.   -see Discerning the Threads of Eschatology

20. Preoccupied with amusements & diversions of many varieties so to not become literate and discerning of just how the Catholic Counter Reformation has taken the world and Protestant Church by storm.    -see Discerning the Threads of Eschatology

21. Have ceased to identify & expose the Papacy as antichrist.   -see A Great Cloud of Witnesses 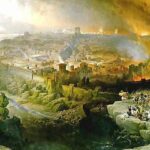